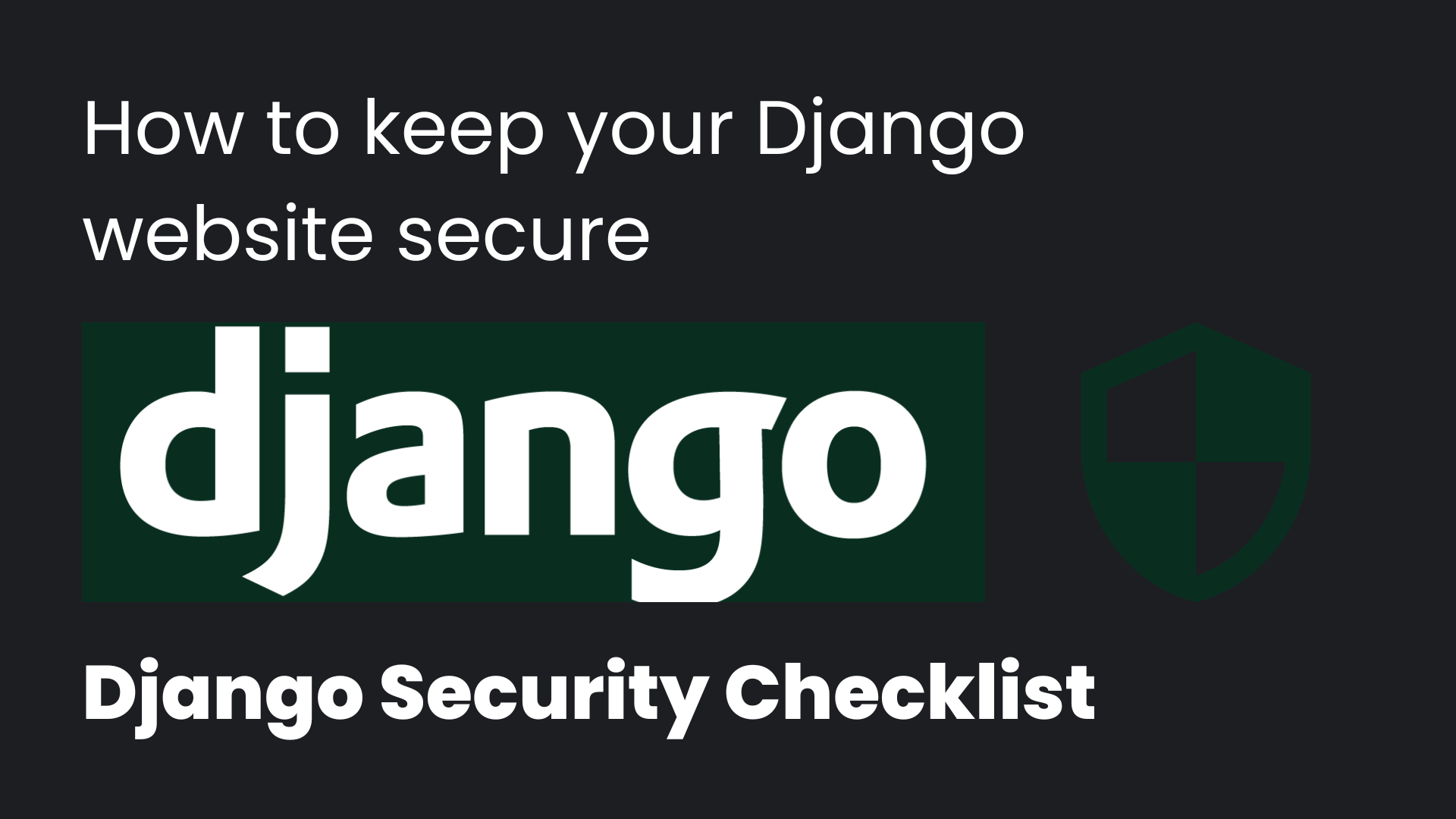 Hello Developers! Do you think the Django site you built is entirely secure and can’t be hacked by bad guys? It might not be as confirmed as you imagine it. Well, in this brief article we will read about how you can keep your Django website secure and hacker-free with a Django security checklist at the end of this article.

This article is going to be very useful, either you are an expert level or a beginner, I will make my best to introduce you to at least one vulnerability or mistake that you are already making.

If you already know about Django and have knowledge about how hackers actually hack a website, you can jump to the Django security checklist at the end of this article.

If you are reading this article, I imagine that you already know about Django. But for fellow developers who are not familiar with Django very much and just want to know some interesting facts about the Django website framework, let’s go through this part first.

What is Django? And why do people prefer Django?

Django is a free and open-source web framework, written in Python. It follows pure Object-Oriented programming concepts, so it can easily be used with any other program or database you wish, for example, Flex (Framework), MySQL, Postgresql, or even NoSQL Databases. Along with these features, Django also has an administrator interface ready for you to be used to manage your site data.

One of the most common misconceptions about Django is that it’s only for building the backend of a website. On the contrary, Django supports powerful tools for templating, which makes it very easy to work with the front end of your website.

The first version of Django was released in July 2005 by its developer Adrian Holovaty who made Django as code for his project portfolio management site eGuru. The most updated version so far is 4.1.

Why do you think people prefer Django over other frameworks?

Django has become the most commonly used web framework around the world because it offers simplicity without compromising power.

The reason for Django’s popularity is its “better than average” solidness and reliability that comes without any schematics. It lets you do everything from scratch, helping novices to progress faster through tutorials and coding challenges, managing data models without creating fancy UI’s (user interface), and making sense of various application environments including server/client tradeoffs in evolving cloud computing platforms.

This powerful web design has been recently taken up by developers for building both podcasts (for streaming services like Spotify), TV shows (for Hulu), and custom applications like the 2dxg project, whose engineers have developed a web engineering system focusing on internationalization, accessibility, security and complexity level.

Django is one of the most secure web frameworks that ever existed. It’s designed for people who want the utmost safety when building OWASP Top Ten-safe applications. Django’s built-in security, as well as expert contributions from the wide community, ensure an easy and safe development experience from start to finish.

Django prevents you from any known attacks that come to your mind, SQL Injection,  XSS, CSRF, Clickjacking, Header validations, and much more!

However, if you don’t use Django as you should (not following the documentation), you might get into some security flaws. For example, Django fully prevents SQL injections but there are some methods where you can write raw SQL which can be a big security issue for your website. Make sure that you go through the Django security checklist at the end of this article to prevent using things that are not meant to be used like that.

So we can say, Django itself is secure until you use it the way it’s meant to, otherwise you can get your website vulnerable.

But don’t worry, we will go through all the ways a hacker can hack your website and how you can prevent them in your Django web application in the next section.

When you imagine a hacker, what comes to your mind? A bad guy who always trying to hack into a system for his/her own benefit. But this does not apply to all hackers.

There are three types of hackers, White Hat, Gray Hat, and Black Hat hackers. When you describe hackers, you are usually thinking of the Black Hat hackers who is bad and hack into systems without any permissions, on the other hand, White Hat hackers are the one that you hire to hack your system with your permission and get into the system and then fix those security flaws or vulnerabilities.

Gray Hat hackers are who don’t have permission to hack the system and do it but they mean no harm to the organization, they usually send an anonymous email with the security flaws your system have.

There are several ways a hacker can get into your website, we will go through almost all known vulnerabilities, plus some others that are less known yet dangerous in our Django security checklist. According to OWASP Top Ten vulnerabilities of the previous year 2021, here is a list of the top most common security flaws in websites.

Besides these vulnerabilities, there are some other vulnerabilities that we will go through in the Django security checklist sections but these are the major security flaws found in websites.

Let’s go through the list one by one and understand these listings better.

When you have a website that has weak or even non-existent encryption on your data then they are vulnerable to cryptographic failures.

For example, By default, Django uses the PBKDF2 algorithm, on top of that Django also adds a SHA256 hash forming a highly secured encryption that requires massive computing time to crack it. However, you have the ability to change that password encryption and if you went with weak encryption then you will get your site vulnerable to Cryptographic Failures.

SQL Injection is when the user’s provided data are not filtered and run on your database, making your database vulnerable.

For example, if you have a search bar in your website where users can search, and let’s say a user is searching for “developer wings” then your SQL query will be something like “SELECT * FROM posts WHERE post_title LIKE ‘%developer wings%’”. However, if the user input is developer’s wings. Then your SQL will be “SELECT * FROM posts WHERE post_title LIKE ‘%developer’s wings%’”. You see by just adding ‘, your SQL query was ended on developer” so here the user can insert other queries to get data from the database which he is not meant to see like users and their passwords. That’s how SQL injection can be very dangerous.

Insecure Design is a topic that can fill up this whole page, most people when hearing insecure design, think that it’s about UI (User Interface), but the reality is otherwise. It depends on the design/architecture of your website’s code. Most developers design the website while developing it, but the website should be designed first, look up to the whole process of the website and its components, and then they should start coding.

To understand Insecure Design in every dept, I suggest reading the attached article of Crashtest Security.

Security Misconfiguration vulnerabilities can take place when a component of a website has an insecure configuration and give cybercriminals the ability to access the parent of that component.

For instance, a web server company provides shared hosting, so if I purchase shared hosting from that company, then I will get a component and limited version of that web server. However, if the shared hosting I received has some security misconfiguration then I can get access to the whole web server by attacking it.

This vulnerability explains itself, as the name suggests when you use an outdated and vulnerable component in your website then your website can be at a big risk.

The example is given while developing a Django website, you might need a library that does some tasks like an HTML to PDF library. And if you installed that library on your website and if it’s outdated or vulnerable then it can make your whole website vulnerable through that extension/library.

Always make sure that you are using an up-to-date and hacker-free library in Django.

Let’s understand this vulnerability by an example, let’s say you have an iPhone that can only be unlocked using your Face Id. When you open your iPhone, iPhone takes very few seconds to verify your identity and unlock it. But what if your iPhone was stolen or lost and someone had your iPhone in their hands? And if they tried to show a picture of you for the face id and the iPhone unlocked and get access to sensitive data like Banking or private Whatsapp chats. Then this would be called an Identification and Authentication Failure.

Software and data integrity failures relate to code and infrastructure that do not protect against integrity violations. For example, nowadays many websites have auto-update like WordPress where the updates are downloaded and installed without proper integrity verification. Cybercriminals can upload their own updates to be distributed and run on all installations.

Logging is important for the developers to know what problems and bugs are occurring on your website. So we usually create a file that stores this information. However, if an attacker gets access to it then it can be really bad for your website. To prevent this type of attack, make sure you don’t have any Broken Access Control vulnerability and that your logs are not visible to any user.

So now we know the top 10 security flaws found in web applications. We can go to the next topic that explains how you can prevent these attacks.

How can you prevent your Django website from being hacked? Django security checklist.

For Django website security, I have created a Django security checklist that you should always follow in order to make your site extra safe. I have also explained them in dept for your better understanding.

I hope I was able to explain how you can prevent your Django application from being hacked and how hackers actually do that. But time is changing very frequently in this technological era and new technologies and updates are being introduced and with them new security flaws, so you must be updated with the new updates of Django to keep your Django website secure.

Thanks for your time!