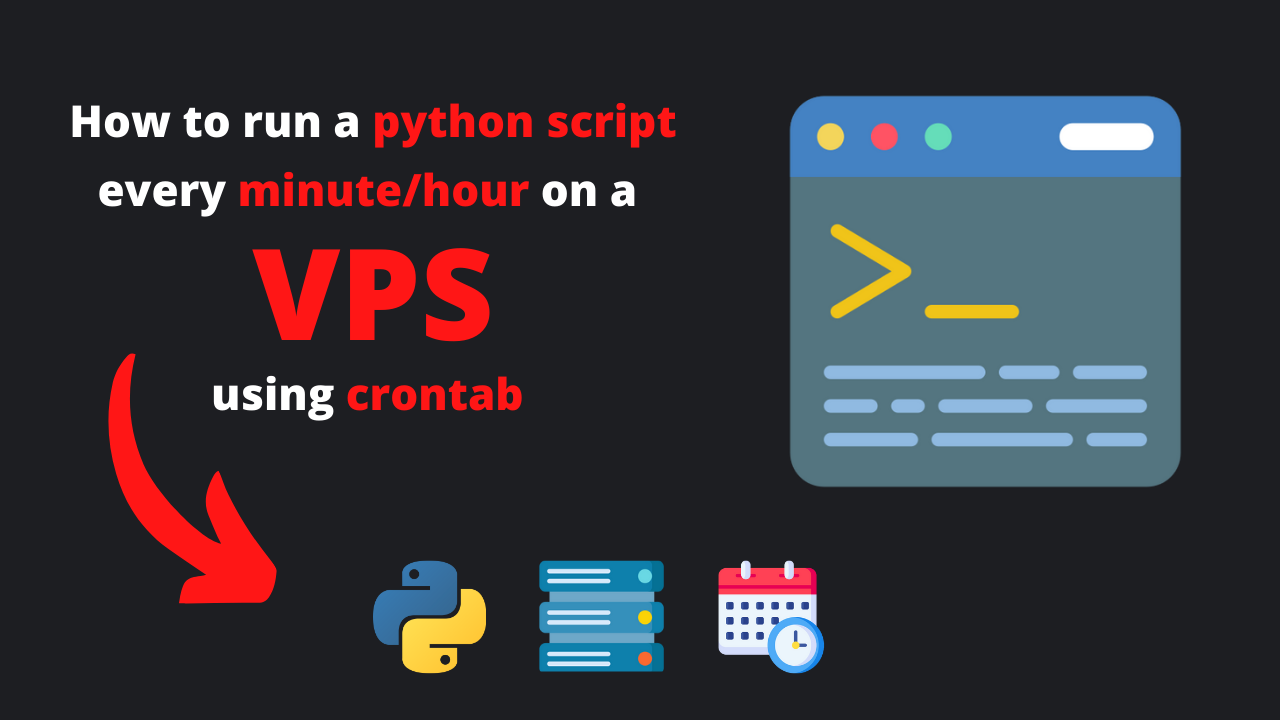 Welcome back! Today’s blog is all about how to run a python script every minute or hour on a Ubuntu VPS using a great Ubuntu tool crontabs in 2022. Most developers works on windows and some of them don’t even know how to work with ubuntu and VPS, I was one of them and I was very struggling to find an answer for me that explains how to make my python script run every in a while on my Ubuntu VPS using crontab so I started digging and after so many errors, I got the answer so I’m going to write it down here to make you avoid doing all the long searching and dealing with all those unknown errors while deploying your python script on an Ubuntu virtual private server.

To deploy your python project or script on ubuntu VPS, follow the steps below or watch this video.

What is a cronjob exactly? Imagine, you have a website that sends daily news to your subscribers on your emails. Now you have some news ready to send to them and you have scheduled them for today, tomorrow, the day after it, and so on. So now you have to go to your website and click on a button that sends the news scheduled for today to the subscribers. This is manual work, you have to go to your site and log in and do all the boring things, on top of that, you can’t be on exact time because you are human, but what if we have our server do those things automatically after a certain amount of time. Like you were sending your news at midnight every day, so you can make your server send the news of the day at midnight every day. To solve this problem, servers have a sort of scheduled tasks system, and those are called cronjobs. In simple words, cronjobs are scheduled tasks that are meant to be executed every minute/hour/day.

But what is crontab then? Crontab is actually cronjobs, or in other words, to make it simple you can say a crontab in Linux and macOS is a tool for cronjobs. To use crontab in Linux you can run crontab -e code to add and edit the cronjobs in your system.

Now that it’s clear what are cronjobs and how they work, let’s start making a python script run every in a while in Ubuntu VPS using cronjobs or you can say crontab.

Get a Ubuntu VPS

Of course, the first thing will be getting an Ubuntu VPS. There are many computing service providers on the market, but Hostinger has always been very fast and affordable for me. Plus Hostinger will provide you with 20% off if you use the link attached. Choose a plan that fits best to your python script or project and then create the VPS with a password. Make sure that you save the password somewhere safe because this is very important.

Connect with the VPS

As soon as you create the VPS, you have to install an SSH Client such as Bitvise or Putty to connect with the VPS. You can also watch the video above to get a graphical understanding of how it’s done.

Install Python and the packages

Now we are ready to run python scripts on our Ubuntu VPS, so now we can transfer our python project there. And to do that, we have to use the FTP protocol. Install any FTP application but I will recommend using FileZilla. So now you have to open your FTP application and enter the details of your VPS. The IP address of your VPS, the username, the password, and the port are to be 22. Here is a graphical example in FileZilla.

After you connect, go to the root folder of your VPS. And you should see something like the image below.

Go to the /home of your VPS, and create a new folder there. I’m going to name it Twitter.

And then just drag and drop the project files into that folder.

Okay after all that we are done with the project files, now let’s try to run the python script on our terminal and see if it works. Just make sure that you run it with python3 not only python. Me, I ran python3 twitter.py and I can see the A.I generated tweets on my Twitter account, so everything is working for my script. If you get any errors, make sure that you have all the dependencies installed. And check what the error is saying,

Now we are ready to make our python script run every hour on our Ubuntu VPS using crontab.

To run a python script every in a while, we use cronjobs. And for cronjobs, Ubuntu has a great tool called Crontab.

To get access to the crontab, you have to run sudo crontab -e the command, this will open the crontab file to be edited.

After running that command you will see a page like the image below.

After that, we are ready to add a new line to the file, a new line means a new cronjob task. A line will contain three parts separated by a space, the first being the time you want the task to repeat itself, the second being the program that is going to be used to run that script or task and then the path to the script that you are willing to run every in a while. Something like below.

The second part says program-name is the name of the program, for us it will be python3. And the third part of it is the path to your program.

Now let’s see what our line of crontab will look like if I want to run a python script every 5 minutes.

Let’s try to run a python script every hour.

What about if I want to run a python script every day?

After you have made these changes, you can save the changes using CTRL + S and exit by CTRL + X. Now you have a python script that is scheduled to run every in a while using crontab in Ubuntu VPS.

You are getting errors on your cron job tasks and don’t know what’s wrong? Then the best option is to add another part to the cron job line to store the log into a file so that you can check what’s wrong.

Thanks for reading this article, also read How to become a web developer without any degree and How to create an A. I powered Twitter bot.